Design a site like this with WordPress.com
Get started
Skip to content
Date: March 9, 2020Author: bluerepublik 0 Comments

I should begin this post with a warning against the generalizations we’re all too prone to nowadays. Voter suppression is an issue to be taken seriously, as are the hundreds of voting precincts closing around the country. However, many activists can latch onto an issue, and spread disinformation in order to help a narrative. This disinformation can take many forms: anecdotes popping up on the local news, smear campaigns taken up by candidates… or, in our case, twitter users trying to do basic math (scary, I know). 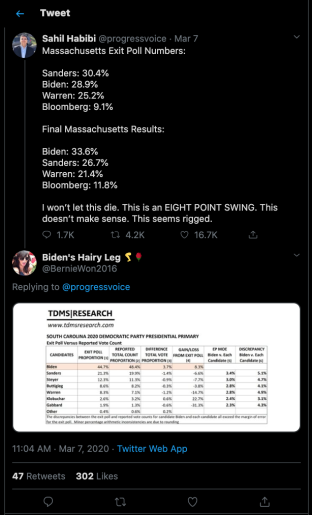 In the wake of Super Tuesday, many supporters of Senator Bernie Sanders have come to the conclusion that something fishy is going on. Casting aside traditional wisdom that “the polls are rigged!” it now became apparent that the polls were 100% accurate, and that proved the actual voting tallies themselves were rigged.

You see, exit polls showed Senator Sanders running closer to former-VP Biden than what was seen in the final vote counts, and sure we could look at explanations such as response bias for the exit poll samplings, or simply point to an increased margin of error… but the simpler, and more politically convenient, conclusion was that the DNC had rigged it. How? Doesn’t matter. But they did rig it.

So the activists, having no other marketable skillsets, went to twitter to complain about

this affront to Democracy. However, most of them forgot the number one rule of pretending like you’re smarter than you actually are: when you copy another kid’s homework, do a brief check yourself to make sure it’s not crap.

And the all too often cited numbers you see on your screen here, come courtesy of the exact same source: TDMS research.

So, how well does this analysis hold up?

The first analysis we’ll be discussing is TDMS’s post on the Democratic Primary Results in Massachusetts. Feel free to open the link provided in a new tab and verify for yourself the screenshots of data I am providing are consistent with the site.

The first problem with this analysis is stated clearly in footnote 1:

It’s been brought to my attention that for CNN, these exit/entrance polls are weighted throughout the night. This is to get statistics on voting blocks, but makes analysis using exit polls as raw data unusable.  If TDMS were to provide the election results *at that point the exit poll were taken* then we could have a reasonable sense of bias. But taking exit polls from early in the night, when early voting is first counted and first out the gate (and adding on response bias as a variable), and comparing them to final, knowingly weighted results, is a useless analysis. From here on out, I’m simply going to copy TDMS’ technique, but use a consistent final exit polls : final results comparison instead of changing time periods, which is bound to cause error.

When we check the finalized numbers:

It appears as if the exit poll was extremely accurate!

The source for the calculations can be found in footnote 5:

Simple enough, let’s go to that paper and see what they say:

Let’s do a little math for fun, using the single proportion:

And so for the complete data, Biden is well within the margin of error. For the “I took a screenshot of the exit poll in the middle of election night” data, Biden is not within the margin of error. Of course… what was Biden’s poll count at that point of the night? Could it be that early voting (which CNN does have surveys for exit voting) had skewed for Bernie earlier causing this difference as the night wore on? Could it be that the response bias at the polls, just as the caucuses have, favored more energetic supporters, which is moreso shifted to Sanders?

But these require actual work to analyze, and all TDMS has the effort to do is misread poll formulas on papers, and post bad data. But… maybe things get better?

TL;DR Not so much

Now onto the TDMS analysis of South Carolina, let’s look at the actual exit polls.

And now, the actual exit polls. 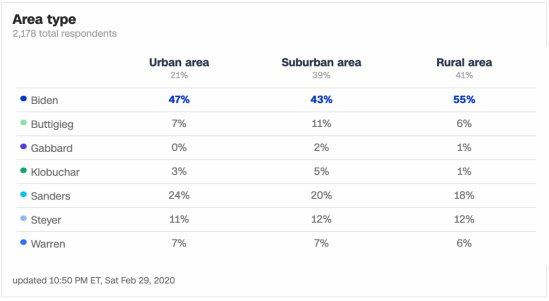 Extremely accurate once again! Within 1% in fact… the true confidence intervals are redundant but confirm the obvious:

Once again, we have a scenario where Biden is barely outside of the confidence interval for TDMS’ data, but entirely within it for the DNC data. Also notice that twice now, the final tally has a smaller margin of error (due to larger sampling) than the incomplete data.

So let’s keep right on track.

I’ve had people wondering about the individual discrepancy for Biden compared to other candidates, so I’ll quickly go through this here: (formula given in the ABC paper linked for part 2). Note that the formula only shows us margin of error for two candidate’s results, when comparing them to one another, usually to see if the resulting difference means the lead one candidate has is within the range of another.

First, Bernie’s exit poll we determine to be 20.22 from the finalized data. Next, we plug that in alongside Biden:

If requested I can update the other states further with this comparative analysis shown, however I have a sinking feeling I’ll simply be duplicating my end conclusion again and again and again (as you read on, you will see why).

Texas is a more interesting case, there is certainly evidence of voting places being closed down, and many were left waiting in long lines at precincts, well after the polls closed. I am entirely for a full audit and extended voting, but while working with the data we do have… let’s see if there’s any evidence of rigging for Joe! Here’s TDMS: 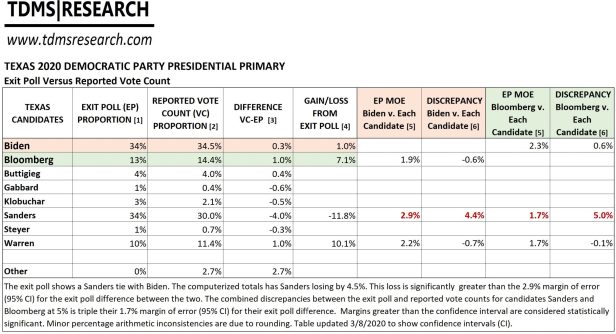 And… well, fascinatingly there’s now a new problem… the evil, brilliant and deceptive DNC has rigged the election for TWO candidates! Bloomberg and Biden! By splitting the vote and nearly losing the state to Bernie, this was the perfect cover to hide their rigging! Jokes aside, let’s look back at the data:

High maintenance as always, I guess I’ll be doing the numbers for BOTH Biden and Bloomberg this time around… 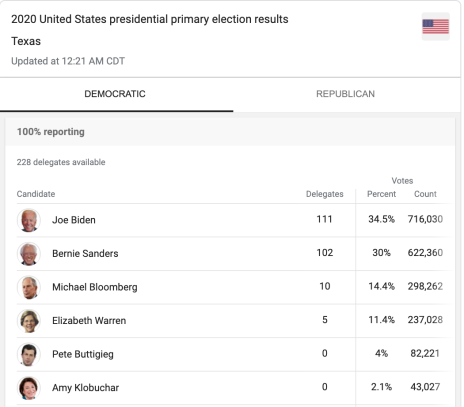 And amazingly, the exit poll for Bloomberg was higher with complete data, but lower for Biden! This should be a firm nail in the coffin for TDMS’ theory that all exit poll data is inflated by the DNC after the fact to make up for the rigged votes: it didn’t happen here with Biden. Given, we are missing a small 3% segment in rural areas

But still, we must determine if we are inside or outside the margin of error:

With the data that TDMS uses: there is practically *no* sign of manipulation, if anything the final results are more worrisome for Biden. I’d wager the missing 3% segment could easily push the margin of error out more, but this is a moot point, as by TDMS’ own analysis there is no rigging to be seen here.

A state Sanders won comfortably… but let’s see what TDMS has to say about the spread: 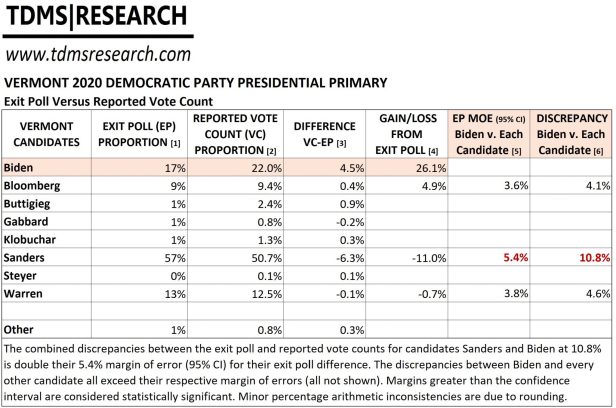 May I take a moment to also address the hilarious column 5 number. This is just a metric used to sensationalize new: BIDEN JUMPS UP 26 POINTS FROM EXIT POLL! in a tweet draws more eyes, and whispers of RIGGING!!!! than the more correct phrase “as a proportion of total votes, the predicted total votes was off by 26% of that said total vote” draws fewer eyes and more confused stares which quickly jump to the nearest calculator.

But let’s do our due diligence, and see what the actual exit polls are: 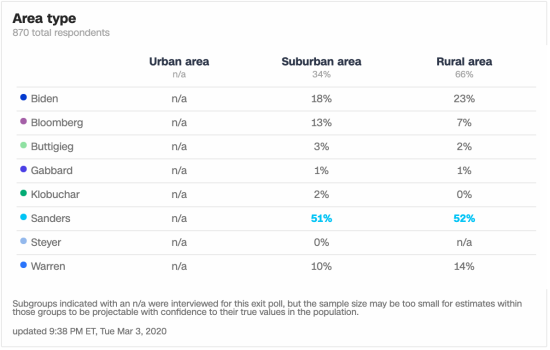 Compare that to the results:

And… wow, off by .01%. It’s entirely unnecessary to run a margin of error analysis given the accuracy here, but just to prove a point:

Surprise surprise, the same story all along. Using screencaps in the middle of the night gives you numbers that don’t correspond to the final tally.

This could actually be avoided if TDMS were to provide the data from the time he claims he got it:

Funnily enough… there’s no evidence that TDMS hasn’t fudged his own numbers. He has provided no screencaps… but this could all be put aside if he simply had the election result data *at that point in time* to compare to the exit polls *at that time* since otherwise, his data analysis is useless.

TDMS has a new post on California here, which I will subject to the usual scrutiny. 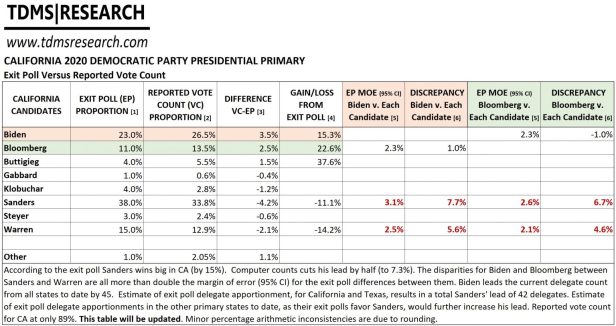 And the real exit polls (I’m using gender of this, as it’s far easier to tabulate and has a certainty of 100%):

but I’ve been made aware that I’m only looking at half of the picture according to TDMS: maybe this is only rigged against Bernie? So let’s examine that as well.

And when we look at the margin of error:

And sure enough, Biden seems to have over-performed significantly! Bernie falls within the accurate range though, but if there is any evidence yet for election rigging, this would be the closest we’ve seen to it! But using bad data and exaggerating results is an entirely improper practice for presenting your data.

The one redeeming part about activists who spread disinformation, is that their lack of intelligence limits their capacity to deceive us. This wasn’t challenging to decipher, merely tedious to wade through.